We are Boost Digital Media Ltd the agency to go to for Torbay Website Design.

We have been building websites since 2015 and can help you achieve your website vision.

We’re rapidly approaching the end of the year and as we look back to where we were at the start of the year compared to where we are now, wow we have had an amazing year filled with plenty of opportunities and a couple of challenges.

So without further a do, I’ve put together a few highlights from this year.

January came and I was back in the studio raring to go, with a meeting planned with my business consultant to look at what the next steps were for the agency and for me, personally.

After a successful and challenging 2018, I wanted to build on this success and drive the company forward, doubling our turnover and growing the company.

At that time the agency was called E3 Digital Ltd. From 2015 it has been my vision to launch a group of companies with E3 Digital Ltd being just the start of that family.

With the quarter planned and the target set I got to work on bringing in those all important clients, as well as completing works for existing clients from 2018.

March was quite a challenging month, however one which saw the end of the quarter with the agency doing well and securing a couple of new clients.

It was also the month that we launched the new Boost Torbay Networking Nights aimed at giving people a platform to simply turn up and network with other businesses.

The concept was to leave with either a business card, meaningful conversation or just feel you’ve put Monday to bed.

In total, the networking events have seen over 275 people book on the nights and have helped people meet and secure new business as a result.

In April, I had legally renamed the company with Companies House as Boost Digital Media Ltd. A name which combined two things I love, website design and running Boost Torbay.

However, from the April our studios in the Torquay Town Centre still had our old branding, whilst we decided on whether or not to proceed with a potential business partnership that could of seen the company double in both size and deliver a new publication for Torbay.

Finally in July I made the decision to move business premises, and work could really begin on launching a new publication for they bay.

Unfortunately, over time, it was apparent that the publication would not meet our expectations and therefore it just couldn’t be released.

September, saw us move business premises again, and this time took the opportunity to completely redecorate the studio, we had new branding put in, ordered new furniture and transformed our previously dated studio into a warm, professional and inviting environment.

Why not call in for a coffee and a biscuit the next time you’re in the area?

Since September I have been working on launching new websites for clients both locally and nationally, and have started to spread my wings by taking regular trips to the West & East Midlands.

I attended the South West Business Expo and met a variety of local and national businesses which resulted in a couple of exciting meetings and potential new leads.

I also relaunched the Boost Digital Media website, which is what you are now reading this from.

It was also, in this quarter, I announced that together with Astrality Business Services we’ll be launching the very first Devon Marketing Festival 2020.

That said, the agency has grown by an additional 56% from where we were last year. A statistic I am immensely proud of.

That brings me onto to 2020, are we looking to grow again?

We sure are, but you will need to watch our blog for future updates.

As a website hosting customer of ours you will be pleased to know that emergency support will be available throughout the Christmas period.

So if you have any problems with your websites uptime during the festive break, give us a call and we’ll take a look into it.

Well done you! Great achievement. Keep me posted on the marketing festival 2020! thanks

Thank you Tracy, we sure will. Look forward to catching up in Jan. :-). 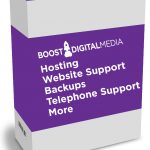 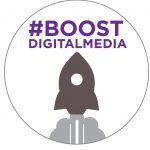